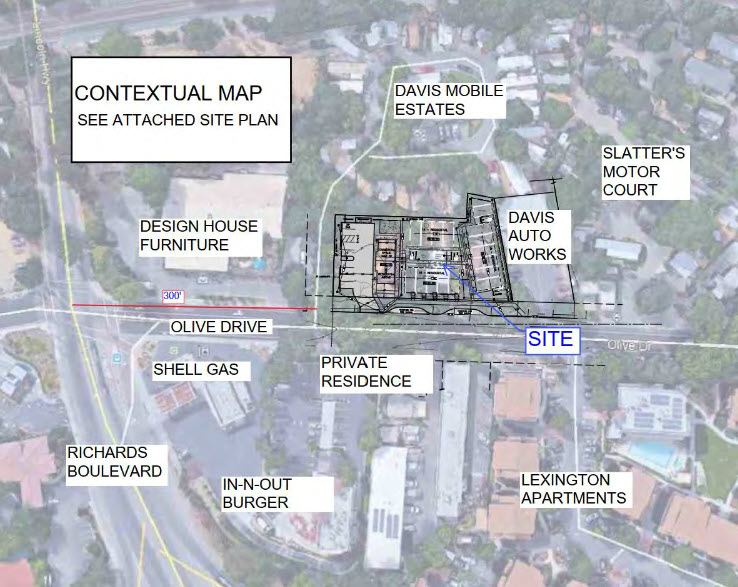 Davis, California – A project to provide housing for the city’s “non-professional workforce”, who currently do not have access to housing opportunities in recent projects, will be presented to the Commission planning next week.

The Olive Drive mixed-use project combines four parcels on approximately half an acre of land (0.56 acres) along Olive Drive.

The project site is bordered to the north by the Davis Mobile Home Park. To the east is an auto repair shop. To the south is Olive Drive and across the road is a mix of uses ranging from a fast food restaurant, single family home, liquor store and apartment complex of 60 units. And to the west is the Davis Design House (furniture store).

The site is currently vacant and previously housed four small single family homes which were demolished.

Access to and from the project will be from Olive Drive. The staff explains, “The project as currently proposed would eliminate the existing four driveways and provide a single driveway off of Olive Drive.”

Staff explain: ‘To accommodate the possibility of having multiple driveways near the intersection of Olive Drive and Richards Boulevard, staff recommended that the applicant consider an alternative site plan which would provide for a shared driveway between the Davis Mobile Home Park, Design House property and subject project.

However, the applicant provided an amended site plan showing “a combined driveway of the proposed project with the existing driveway currently serving the Davis Mobile Estates”.

The applicant proposes to provide a total of 8 parking spaces, of which 4 will be allocated for commercial and office use, three for residential use and one for Zipcar.

Ordinarily, the Municipal Code would require 47 parking spaces, one per one-bedroom unit, plus three for retail and one for the office, for a total of 51 spaces.

According to the applicant, “the objective of the project is to reflect the promotion of alternative modes of transport, such as walking, cycling, carpooling and public transport with a view to obtaining the designation of a priority transport project in common. …, the project’s proximity to bus and train stations, several city Unitrans stops, downtown, UC Davis grocery store and medical services (within a 15 minute walk) supports all alternative modes of transportation . The project will charge tenants separately for these 3 spaces which alone should discourage tenants from driving. The project will also provide an on-site Zip car for use by tenants. »

Staff write: ‘The claimant believes that these explanations justify the reduction in required parking spaces as proposed.’

The current Affordable Housing Plan would provide a total of seven deed-restricted affordable units, of which 1 will be allocated to a very low-income household and 1 to an extremely low-income household, while the remaining 5 to households low income. The 7 units represent 15% of the total 47 units, which is in accordance with the Municipal Code.

Staff note that the code, however, requires a 5% target for each of the three income levels.

“This proposal is inconsistent with the goal of affordability mix for all three income levels,” the staff wrote.

According to the applicant, “our initial proposal included an act restricting 13 units for low-income households. We felt that this proposal is unique in that we are not seeking any subsidy for this provision. This turned out to be a deed-restricted amount of 28% of their project as low-income housing in perpetuity.

This request “stretched the capacity of this provision”. So they changed their proposal to five low income units as well as one very low unit and one extremely low unit for a total of 7 restricted affordable units per deed.

“We believe this will meet the recommendations of the Social Services Commissions and provide the community with privately subsidized affordable housing,” the applicant wrote.

Staff write that “(the) candidate’s position is justifiable given that the affordability suit is a target, not a requirement.”

Finally, the proposed infill project is “determined to be a transit priority project” and therefore exempt from CEQA. Raney Planning found that “there are no significant environmental factors justifying the preparation of an Environmental Impact Report (EIR)”.

Staff write that “(we) cannot identify any significant issues with the proposed project.”

They add that a transportation study prepared for the proposed project by Fehr & Peers analyzed potential impacts on the city’s road network, VMTs, pedestrian, bicycle and public transport facilities near the project.

“The transportation study provides recommendations for changes to both site plans. However, these recommendations are not necessary to ensure that the project will not significantly increase risk in the Olive Drive area,” staff wrote.

Fehr & Peers found that the proposal “does not significantly increase the risks due to design features”, in part due to “the relatively limited amount of Project vehicle traffic to/from the on-site parking and parking spaces”. carpooling “.

Commission cap may force us to cut car service in Bangalore: Uber